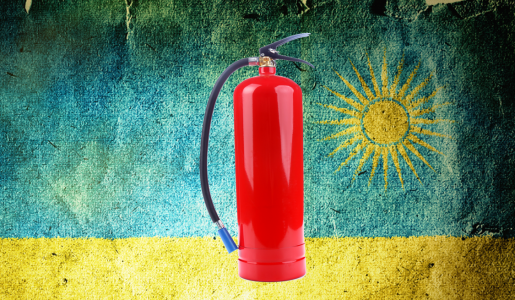 How did the outcome of a meeting in Kigali, Rwanda in October 2016 affect the data centre fire suppression market?

Let’s consider the current ways of putting out a data centre fire and some of the wider technical and environmental issues they raise.

All fire suppression techniques revolve around removing the oxygen or the heat from a fire situation, or both.

We can do this by;

There are some misconceptions about the use of water mist in a computer room environment as many people would not associate water with electrical fires.

The first question people would ask, ‘Isn’t his just going to short-circuit the equipment?’ This won’t happen because pure water is not a conductor; it’s only the dissolved salts in water that conduct electricity. Pure water is about one hundredth the conductivity of tap water and one millionth that of seawater. So of course any data centre fire suppression system using water must make sure it is very clean.

Presuming it is very pure water means that it will also evaporate without leaving any residue on equipment or infrastructure.

Water mist fire suppression suffers from none of these and in particular it allows the fire to be addressed only in the area that is on fire or producing smoke and so only one small zone will be subjected to the water mist.

Many data centre operators are not keen on water in their computer rooms due to the potential problem of leaking and dripping overhead pipes. It is important to know that a water mist fire suppression system is a pre-action system. That means that there is no water contained in the pipes under normal circumstances. Only when the room is under a fire alarm condition will water be released to the overhead piping system.

Let us also consider the environmental aspects of water mist compared to the class of gasses known as HFCs or hydrofluorocarbons.

The use of water as a fire suppressant has no adverse environmental issues at all. As to HFCs, well this is where Rwanda comes in.

The most popular method to suppress fire a in a data centre is to flood the room with a gas. One family of gasses is known as chlorofluorocarbons (CFCs) and their brominated cousins known as halons. These chemicals were very popular as refrigerants and fire suppression gasses until 1984 when scientists started to question where our ozone layer was going. They soon realised that the halogens contained within CFCs and halons were very effective at taking ozone molecules out of commission.

Ozone is essential to protect us from excessive harmful ultra violet radiation from the sun and so chemicals started to be judged by their Ozone Depletion Potential, ODP, and the 1989 Montreal protocol agreed to get rid of them. The United States banned the production and import of Halons in 1984 and the EU ban on the use of Halon in fire extinguishers came into force in October 2000 and was implemented in the UK in 2003 although some ‘critical’ applications are still allowed.

So what gasses are ‘approved’ for fire suppression? The market splits into two here: one type is known as inert gas and it works solely by reducing the oxygen content of the room down to about 14% by injecting large amounts of a mix of nitrogen and argon. The downside is that you need a lot of it, so it is bulky and quite expensive and like all gas suppression techniques your room needs to be effectively sealed and be able to survive the large pressure event that a gas release will initiate.
The other method works by a combination of chemical and oxygen-reduction means. Gasses here are known as hydrofluorocarbons, HFCs, and another group called Fluorinated Ketones.

The most widely recognised list of approved fire suppression gasses is the NFPA 2001:2015 Standard on Clean Agent Fire Extinguishing Systems. There isn’t exactly an equivalent European list but we do have the ‘F-Gas’ Directive that only allows gasses with a zero ozone depletion potential. The F-Gas Directive lists HFCs and PFCs (Perfluorocarbons) that are allowed to be used in the EU. This includes familiar brand names such as HFC227ea (FM200) but there is no list that specifically authorises inert gasses or fluorinated ketones.

So where does Kigali come in? Having, hopefully, won the battle with ozone depletion potential people now consider the Global Warming Potential, GWP of a substance. This is the ability of a substance to trap the sun’s heat within the atmosphere and not allow it to radiate back into space, hence the ‘greenhouse effect’. GWP is normally compared to the global warming potential of carbon dioxide which is rated as ‘1’. This is where HFCs now have a problem. If we look at a typical (and very popular) HFC fire suppression gas such as HFC227ea, it has a GWP rating of 3220!

Politicians are now considering the GWP potential of substances and this led to the meeting of world leaders on the 14th October in Kigali to reinforce the Montreal Protocol that addressed ozone depletion.

The outcome of this is the intention to reduce HFCs dramatically in the environment and the main target is the air conditioning industry but the fire suppression industry will be caught up in the slipstream.
According to the BBC, richer economies like the European Union, the US and others will start to limit their use of HFCs within a few years and make a cut of at least 10% from 2019. Some developing countries like nations in Latin America and island states will freeze their use of HFCs from 2024.

Other developing countries, specifically India, Pakistan, Iran, Iraq and the Gulf states will not freeze their use until 2028. China, the world’s largest producer of HFCs, will not actually start to cut their production or use until 2029. India, will start even later, making its first 10% cut in use in 2032.

In Europe however we can expect to see changes over the next few years as HFC227ea will be viewed as a very ‘un-green’ option and this will lead many users to consider alternatives such as water-mist fire suppression or inert gasses.

How did the outcome of a meeting in Kigali, Rwanda in October 2016 affect the data centre fire suppression market?

In this paper we consider the current ways of putting out a data centre fire and some of the wider technical and environmental issues they raise.

To read more please Login or Register for FREE to view the whitepapers.